Recently, many Skype users have complained that they have been unable to call their families and friends using the messaging app. The UAE telecom providers have responded via Twitter that these call apps are disabled as they are being compliant with the Telecom Regulations Authority VoIP policy wherein VoIP services are to be provided only by licensed telecom operators.

The ban of VoIP calls (voice/video) are in compliance with the UAE’s Telecommunication Regulations Authority rules that allow VoIP services are to be provided only by licensed telecom operators. 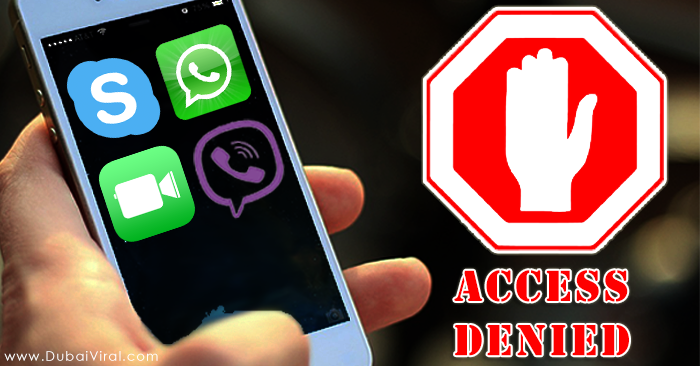 Below are the statements both from Etisalat and Du, respectively.

Skype is a messaging application that offers chat, voice and video calls over the internet. This is a very useful app especially for expats in Dubai who use this service in order to communicate with their families back in their home countries. Skype uses the internet as the source which makes it free for users to easily talk and have video calls so long as they’re connected to WiFi.

A lot of expats and workers save money when using Skype, WhatsApp, Viber and other mobile apps to communicate. While the chat service is still alright, the voice and video call features are disabled.

No FaceTime included when you buy iPhone in UAE

Tweets from Du and Etisalat

The access to the Skype App is blocked since it is providing unlicensed Voice over Internet Protocol (VoIP) Service, which falls under the classification of prohibited contents as per the United Arab Emirates’ Regulatory Framework. Thanks

Du has also responded to a tweet inquiry confirming that VoIP calls are blocked:

Hello, please note that voice/video calls (VoIP) are blocked in compliance with the UAE’s Telecommunication Regulations that allow VoIP services to be provided in the country only by licensed telecom operators, (1)

Skype, in a tweet response affirms the statements and directed users to their FAQ page for more information on the ISP block on Skype.

What are the options for UAE Residents?

UAE residents who wish to still use internet services to call loved ones are given an option by Etisalat to do so through the use of recently launched apps such as BOTIM and C’Me. These apps come with a monthly fee. As we checked the plan packages for these apps, the cheapest monthly fee is AED 50 per month.

Dubai to Build the Largest Concentrated Solar Power in the World