Soon, Burj Khalifa (828 m) will be no longer the tallest’s world structure in the world, as Dubai manages to build a new structure with 100 meters more than Burj Khalifa – Dubai Creek Tower (928 m).

“The new tower sets another challenge in the history of human architecture: a race the UAE deserves to lead.” – Sheikh Mohammed bin Rashid Al Maktoum. 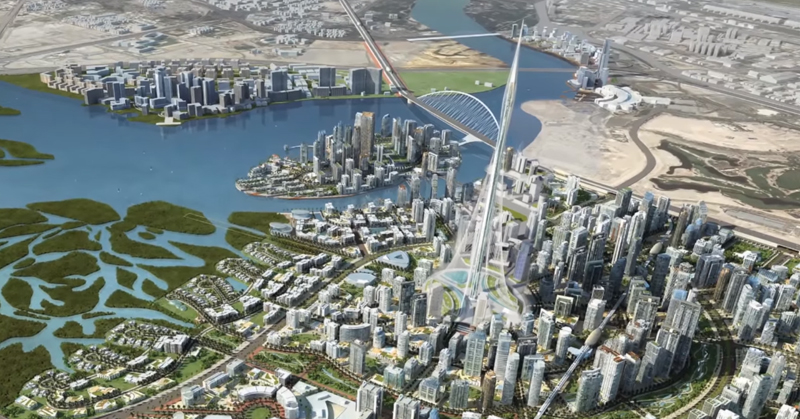 Sheikh Mohammed put the first stone of the new structure that will step Burj Khalifa a side as a tallest building in the world. A huge replica of the Dubai Creek Tower has been unveiled at Dubai Mall.

The 3D replica that weighs 3,000kg, took 4,000 hours to be finished.
Sheikh Mohammed earlier described The Tower as “a unique architectural masterpiece on par with Burj Khalifa and the Eiffel Tower”, also Dubai’s ruler aims to create a new skyline for the city before the World Expo 2020.

October 2016, The construction of the Dubai Creek Tower started at a preliminary cost of AED 3.67 billion (US$1 billion).
January 2017, a modified model of the Dubai Creek Tower design was displayed at the Sales Center of the complex. The floor count and height was later increased.
February 2017, a rendering of The Tower appeared, which representing The Tower as a building supported by cables. It was also announced that the name of the tallest building in the world will be Dubai Creek Tower.
2020, is the estimated completion of The The Tower.
2021, is the estimated opening.

Dubai Creek Tower will be the centerpiece of Dubai Creek Harbour
only a 10-minute drive from downtown Dubai, you can reach the future city, where Emaar properties has unveiled it with a huge residential projects.

The Dubai Creek Tower is designed by the Spanish-Swiss architect Santiago Calatrava Valls, who takes design inspiration from the lily flower and traditional minarets. Santiago is also known for his futuristic structures as the City of Arts and Sciences complex in Valencia.
There will be many features for The Tower, it will consist of many observation decks that allows you to have a 360° view, glass balconies that rotate outside the wall of the Dubai Creek Tower, luxury hotel, more than 18 floors of shops, and more of tourist facilities.